New in Theaters:
Even the Rain 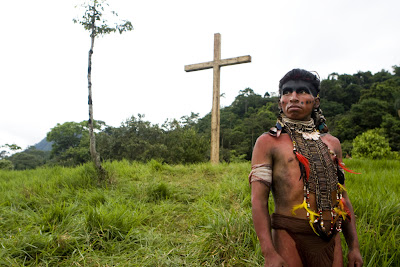 A director shooting a gripping epic about the tyranny of Christopher Columbus gets a lesson in humility in Icíar Bollaín’s potent satire about First World humanitarian hubris running up against Third World realities. Though the film as a whole is about as subtle as an anti-imperialist polemic by Howard Zinn — it’s actually dedicated to the late, truculent left-wing historian — and not without some serious structural flaws, its burning spirit has an unimpeachable potency…
Even the Rain is playing now in limited release and should expand over the next couple of months. Try to seek it out. You can read the full review at filmcritic.com.

New in Theaters:
Of Gods and Men

The Psalm that introduces Xavier Beauvois’s lacerating elegy doesn’t leave much mystery as to where things are headed: “You shall die like men and fall like princes.” There is an air of predestination that clouds Of Gods and Men, giving it the feel of some ancient allegory told and retold by scholars throughout the ages…
Of Gods and Men opens today in limited release. You can read the full review at filmcritic.com.

Today’s entry from Filmology is The Wild Bunch (1969), Sam Peckinpah’s absurdly war-like elegy for the end of the Old West and for a time when bad guys could just head down Mexico-way whenever things got dicey.
My book, Filmology: A Movie-a-Day Guide to a Complete Film Education, is now for sale in both paperback and ebook formats.

For all the skittery flashbacks and paranoid atmospherics, there isn’t much to Unknown in the final reckoning—and this isn’t a bad thing. At least it doesn’t dig into the seeming metaphysical mystery suggested in early scenes, and its schematic screenplay, doesn’t quite abandon its more interesting questions, concerning identity and purpose. But a couple car chases and furniture-breaking fights later, the fact that Unknown is a Joel Silver production is increasingly apparent. Again, this is not the worst thing…
Unknown opens in wide release today. You can read the full review at PopMatters.

Lee Chang-dong’s perceptive drama Poetry, about a woman facing the onset of Alzheimer’s as well as a torrid family crisis, is keenly acted but meandering….
Poetry opens in limited release tomorrow. You can read the full review at Film Journal International.

Today’s entry from Filmology is The Lives of Others (2007), Florian Henckel von Donnersmarck’s brilliantly paranoid, thrilling, nerve-jangling investigation of Cold War life in East Germany.
My book, Filmology: A Movie-a-Day Guide to a Complete Film Education, is now for sale in both paperback and ebook formats.

New in Books:
Prophets of War

A book could have been made from the story of a single fighter plane alone. William D. Hartung’s Lockheed Martin exposé starts with a sharp and concise reckoning of how the company made the full-court press in order to keep its problematic F-22 Raptor fighter program alive. It’s a thrilling piece of journalism, combining deep background knowledge of the program’s particulars with a keen grasp of the political machinations that swirled around its long undeath…
Prophets of War is on sale now. You can read the full review at PopMatters.

In Theaters:
The Roommate

In a film whose sole operating principle seems to be that its female co-stars share a resemblance, the audience is asked to sit still for roughly an hour until a sweet-natured college freshman finally figures out that her roommate is a psychopath. While it’s not unusual for viewers to figure such things out before a protagonist in a B-movie of this sort, Sonny Malhi’s screenplay takes her cluelessness to a truly stratospheric level. Much is made of the sweet-natured freshman, Sara, having just moved from Des Moines, which in the world of this film is a magical, mystical place where mental illnesses are unknown and violence a foreign concept…
The Roommate is playing pretty much everywhere in the known universe, for some reason. Read the full review at filmcritic.com.

It’s rarely fair to discuss the novel from whence a film has been adapted. Most viewers haven’t read the book, and so will be left out of the conversation. Even more frequently, the literary source is a mere point of departure, providing a framework plot and perhaps a mood, rather than details.
But when discussing Richard J. Lewis’ take on the late Mordecai Richler’s 1997 novel, Barney’s Version, it’s almost impossible not to discuss the source, if only to illustrate pale and confused the film is by comparison…
Barney’s Version is in theaters now. You can read the full review at PopMatters.

In Theaters:
The Other Woman

The pain is burningly real, while the settings feel lived-in and appropriately muddied by experience. But there’s something in the way that Emilia – Natalie Portman’s protagonist in Don Roos’s mostly-sharp, sometimes-baffling comedy of manners – escapes the consequences of her actions that feels just plain wrong…
The Other Woman opens tomorrow in limited release. You can read the full review at filmcritic.com.

In Theaters:
Into Eternity

Consequences aren’t something that human beings ever seem to get the hang of. This is the worrisome possibility that floats in the cold, wintry air of Into Eternity, Danish director Michael Madsen’s curious, flinty documentary about Onkalo, a nuclear-waste depository being constructed deep under a frozen Finnish forest….
Into Eternity is playing now in limited release. You can read the full review at Film Journal International.

There are some problems so titanic in scope, so devilish in their base immorality, that to approach them with anything resembling subtlety can almost seem an insult. That’s the sensibility at work in Samuel Fuller’s 1963 electroshocker of a jeremiad, Shock Corridor, which aims to jangle as many nerves as possible in the shortest time available – subtlety be damned. After all, the problem was America…
Shock Corridor is out now in a sterling new Criterion edition packed with extras. You can read the full review at PopMatters.