Imagine you’re the parents of an adorably well-behaved six-year-old boy. Then the hospital calls and tells you that in fact, your child was switched with another family’s when they were born—your biological son has been raised by somebody else. What do you do? That’s the conversation-sparking premise behind Kore-Eda Hirokazu’s brilliant new melodrama Like Father, Like Son, playing now in limited release.

There’s a Lifetime movie lurking not far beneath the deceptively placid surface of this cutting family drama about a Japanese couple who discover that their six-year-old son is actually somebody else’s. Now, not only do they have to come to terms with the realization that their son is not related to them, but that their biological child is still out there, waiting to be met. What is their real son like, and if they haven’t raised him, what makes that boy their real son and not the one they’ve been creating a family with? Over the course of its smartly plotted two hours, writer/director Kore-Eda Hirokazu’s emotionally knotty film raises question after question about this interruption of what seemed initially like domestic bliss. The biggest of them being: Does any of this even matter?… 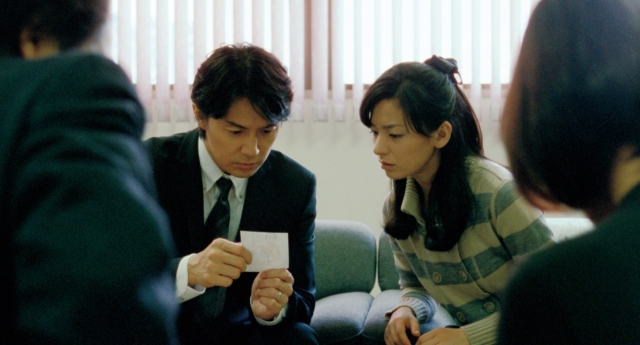 Like Father, Like Son strangely missed out on this year’s foreign film Oscars, but won the Jury Prize at Cannes, where Steven Spielberg saw the film and nabbed the rights for a perhaps inevitable American remake by Dreamworks.

Every so often in Baltimore, swarms of teenagers and twentysomethings will come swarming through an intersection, doing paralysis-defying tricks on their bikes or four-wheelers. They’re called “12 O’Clock Boys,” and they’re the subject of an interesting new documentary about hope (or the lack of it) and fantasy in the inner cities.

12 O’Clock Boys opens in limited release this week after playing the festival doc circuit. My review is at Film Journal International:

…Their name comes from a signature move where a rider pops a wheelie so high that the front wheel goes straight up like an hour hand on a clock pointing to twelve. It supplies phenomenal footage for local news shows, confuses many of the drivers and pedestrians they’re swarming past, thrills some bystanders, and infuriates others. “What are we doing about these little scumbags?” shouts a talk-radio caller. Over the three years that director Lofty Nathan follows his young protagonist, Pug, his enraptured camera witnesses one all-consuming emotion: Pug wants nothing more than to be a 12 O’Clock Boy. The film feeds off his enthusiasm…

Mostly remembered today as the man who wrote White Fang, in his time Jack London was one of the most popular living American authors. He was as celebrated for his wideranging command of styles (adventure stories to science fiction and political polemics) to his wildly wolfish and nomadic lifestyle. London was a heroic striver or sadistic bastard, depending on who you asked. He showed up in last year’s historical gothic horror novel The Accursed by Joyce Carol Oates as a bullying alcoholic who appeared able to drink everybody under the table and then write a bestselling novel about it.

In the Weekly Standard‘s review of the new London biography by Earle Labor, William Pritchard notes that London’s prodigious literary output (50 books, 200 short stories, 400 nonfiction pieces) looks so impressive not just due to how swiftly it was delivered (he died at age 40) but to how much life he packed in when not writing:

…working as an adolescent in a cannery and as an “oyster pirate” on Oakland’s waterfront; going on a seal hunt in the Bering Sea; riding the rails across America, with an interlude of 30 days spent in the Erie County Penitentiary for vagrancy; finding out how the poor live in London’s East End; joining the gold rush to the Klondike; running for mayor of Oakland on the Socialist ticket; sailing to the South Pacific and visiting Robert Louis Stevenson’s grave in Samoa; observing cannibals in the Solomon Islands. This is only the beginning of a list that doesn’t include his two marriages, his fathering two children with his first wife Bella, or his periodic intakes of large quantities of alcohol—all the while becoming, by 1915, the highest-paid author in America.

George Orwell called London “A Socialist with the instincts of a buccaneer,” which seems to get it about right.

Best-of lists are particularly absurd when it comes to books, with thousands of titles being released in 2013 alone and easily hundreds of them most likely being worth forking over $25 for. But nevertheless it’s helpful to pull notable ones out of the stacks of new releases; otherwise where would you even get started?

To that end, I published a piece over at PopMatters with short writeups on my 15 favorite books of 2013. It’s a good collection with something for everybody, fantasy to military history, graphic novels to current affairs, Thomas Pynchon to Scientology. You can read it here.

Once upon a time you could safely rely on being able to find a couple things somewhere on TV, if you just flipped around long enough: The Three Stooges and the old Batman series. Running in seemingly near-constant syndication long after its too-brief run (120 episodes over 3 seasons from 1966–68), its Pop Art-mad cheeky humor was the way that most people growing up in the 1970s was introduced to the Caped Crusader. Once Frank Miller and Tim Burton started going all gothic on Bruce Wayne in the ’80s, it was always characterized as a reaction to the camp factor of an Adam West Batman and villains like Liberace, Tallulah Bankhead, and Milton Berle.

But the show has been increasingly hard to find outside of YouTube and black-market dubs, due to a long-running rights dispute. That may soon be over, as it was reported yesterday that the entire run of the series will be released in a box set of DVDs and Blu-ray sometime later this year. The news was broken by … Conan O’Brien. Big fan?

Tom Clancy’s Jack Ryan was your basic all-around Cold War fighter, able to lead men into battle and synthesize data with equal ease; an analyst who knew his way around a battlefield. Alec Baldwin, Harrison Ford, and Ben Affleck have played him in the four movie adaptations of Clancy’s bestselling novels. Now, just a few months after Clancy’s passing, Kenneth Branagh’s new take on the series hits screens with Star Trek‘s Chris Pine in the starring role and a wholly new storyline “inspired by” the Ryan books.

For this second reboot after 2002’s unloved Ben Affleck vehicle The Sum of All Fears, the Cold War franchise is repurposed for new threats with a dramatically younger-seeming hero. It’s a high-action and chase-heavy origin story in the more self-aware Casino Royale mold, with brisker action and nods at its hero’s vulnerabilities. Chris Pine is now the fourth actor to strap on the security badge as Jack Ryan. With his glowing blue eyes and the demeanor of a just-barely-reformed frat guy fresh out of college, he’s by far the most schoolboy of the lot, though at 34 he’s actually older than Alec Baldwin was when inaugurating the character in 1990’s The Hunt for Red October. Pine isn’t the worst choice for the role, he has a whippet physicality and a crafty gleam, but it’s hard to see him growing old in this role… 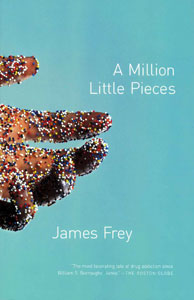 The last time James “A Million Little Pieces” Frey was heard from, he was writing a novel about Christ called The Final Testament of the Holy Bible. There was some chest-thumping about how shocking it was going to be (“Be moved, be enraged, be enthralled by this extraordinary masterpiece” the press material said) but then it came out and promptly dropped from sight, as though he were the anti-Salman Rushdie.

Now, he’s cropped up again, this time with a $2 million deal for a YA novel called Endgame. This is the story, according to Deadline:

In a world similar to Earth, there are 12 bloodlines, or races. Each bloodline has a champion between the ages of 13 and 17 who is trained as a warrior and is always ready to do battle. When they turn 18, the teen warrior behind them gets promoted. This has been the case for hundreds of years, but no one remembers why — they’re always ready for some sort of battle to take place, but it never does. But the tradition continues. And then one day they’re called to fight, and all the bloodlines but the winners will be exterminated. They’re fighting to be the last race.

Besides awesomely resurrecting the old “In a world” movie trailer trope, that description sounds suspiciously like an amalgam of I Am Number Four, the YA novel about alien races battling on Earth which he co-wrote under a pseudonym as part of Frey’s Full Fathom Five fiction chopshop, and a certain series about teenagers fighting to the death. There’s also some mysterious involvement by Google, but that remains under wraps.

It’s a canny move for Frey, who was smart enough to release Pieces just as the addiction-memoir trend was cresting, and can clearly see that while there’s still a hunger for YA science fiction, the dystopia thing may have been played out, so why not resurrect it in space? All one can hope is that Christopher Lambert will somehow be involved once it inevitably hits the screen, since after all, there can be only one.