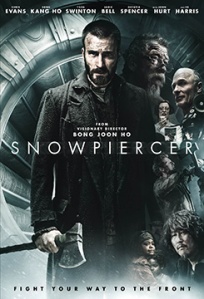 Bong Joon-ho is a South Korean director who isn’t a household name in the States but by all rights should be. In his newest film, Snowpiercer, he imagines a quasi-steampunk post-apocalyptic thriller that’s also a handy little morality tale about class inequality.

Snowpiercer is available now on DVD and Blu-ray. My review is at PopMatters:

The physics of Snowpiercer’s futuristic plot are as stripped-down as the backstory is convoluted. Every human being left alive is on board one train snaking across the frozen wasteland. First class is up front, replete with late Roman Empire consumption and a mindset best described as rave-club Borgia. Everybody else is crammed cheek-to-jowl in the filthy back of the train. Those in back want to get up front. All that stands between them are many locked doors, squads of malevolent guards, years of social conditioning, and Tilda Swinton acting like a toothy Margaret Thatcher after one too many gin and tonics…