Sicario: Day of the Soldado opens this week. My review is at Film Journal International:

The portentously named follow-up to Denis Villeneuve’s moody and murky 2015 cartel thriller starts with a pair of bombings and a declaration of war. A Muslim man blows himself up in Texas after being caught by the Border Patrol while stealing into the country. Then several other men walk into a supermarket in Kansas City and detonate more suicide bombs … In the news business, they would call this confluence of scarifying and adrenaline-charging events Fox News Bingo. In the movie business, it’s just Sequel Maintenance…

In Denis Villeneuve’s Sicario, an FBI agent played by Emily Blunt is roped into a murky mission targeting a Mexican drug cartel that’s been piling up bodies on the American side of the border. Benicio Del Toro and Josh Brolin play two of her suspiciously close-mouthed and rule-bending handlers. 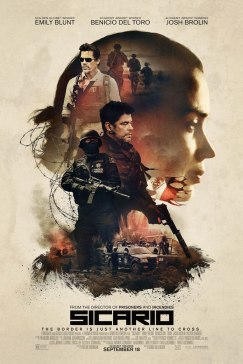 Sicario is already playing in limited release and expands wider around the country this week. My review is at Short Ends & Leader:

Sicario is a hard-nosed procedural for the post-post 9/11 era. Relevance to the modern era of imploding certainties is etched in every scene. Lines are blurred as spies, soldiers, federal agents, and cops are thrown into hybridized hunter outfits and sent after their targets in a landscape where morality comes in shades of grey and convenience. The film flashes on a collapsing social order, mutilated naked bodies swing underneath overpasses in Ciudad Juarez and hints of the same to come on the American side…