The 2011 dance documentary from Wim Wenders, Pina, was a refreshing new usage of the 3D format for nonfiction film. (Werner Herzog tried to use it to much less effect in Cave of Forgotten Dreams). The film is available today from Criterion Collection in DVD and Blu-ray. My full review is at AMC Movie Guide:

Joy isn’t a feeling that one associates with Wim Wenders all that much. Wonder or ennui, maybe irony, but not joy. But nevertheless that’s the first thing that springs to mind with his electric new 3D dance documentary, his first feature to get a real Stateside release since 2005’s moody, downbeat Don’t Come Knocking. There are other feelings and moods wrapped up here, tragedy and loss, but with all the sunlight (has the man ever shot a brighter film?) and sweeping movement, the joy prevails. This is filmmaking as glorious music…

We can complain all we want about the lack of exciting new visions in mainstream cinema, but then when one does come along, it’s all too often ignored. Case in point: David Cronenberg’s full-bore millennial freakout adaptation of Don DeLillo’s semi-apocalyptic Cosmopolis:

After a few years working in genres like the gangster film (Eastern Promises) and the art-house period piece (A Dangerous Method) threatened to turn him into a respectable filmmaker, David Cronenberg thankfully returns to the perverse, literary artistry of more contentious works like Crash with this abstract, pitch-black comedy. For all its artificial mannerisms, though, Cosmopolis isn’t one of the director’s more abstruse and off-putting works; this is a sleek, seductive construction. The concoction of high-end theorizing on the state of the world, finance and the social sphere mixed with deadpan satire, in addition to the expected jabs of rough sex and ultra-violence, is a highly effective one for audiences willing to go along (ahem) for the ride…

On a relatively quiet week for home-viewing releases, Cosmopolis is available today on both DVD and Blu-ray; check it out.

My full review is at Film Journal International. 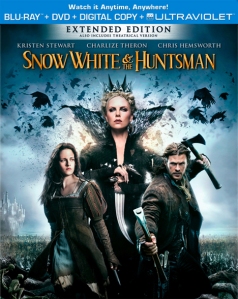 My full review of the DVD / Blu-ray release of the gorgeous but strangely Twilight-esque Snow White and the Huntsman is available at PopMatters:

Like the original Snow White tale, although romance is ultimately involved, the film is truly more concerned with the fight between beautiful young Snow White and the slowly withering old hag Queen Ravenna. (The gender politics are none too subtle here, with Ravenna’s monstrousness keyed to her sensuality, as she is practically the only character in the film to show any evidence of a sex drive.) The Huntsman, a drunk who only took the Snow White job so Ravenna could use her dark arts to raise his dead wife back to life, supposedly falls for the princess on the run but there’s little evidence of that on screen…

It would be too reductive to say that Wes Anderson’s films are about people who don’t fit in. Yes, his characters are on the oddball end of the spectrum. But in Anderson’s better films (like The Royal Tenenbaums), he doesn’t fall prey to the common bugaboo of those artists who celebrate the unique. Namely, he doesn’t even bother creating an outside world to judge them for their curious behavior. There is no island of misfit toys for his characters to retreat to, because the whole that is visible doesn’t seem much different. Everybody doesn’t fit in, together…

The Royal Tenenbaums is available now in a beautiful new Blu-ray transfer from Criterion. Read my full review at PopMatters.