Like many eager young men at the time, Ernest Hemingway (born today in 1899)  tried to enlist to fight in World War I. “I can’t let a show like this go on without getting in on it,” he wrote to his older sister Marcelline. “There hasn’t been a real war to go to since Grandfather Hemingway’s shooting at the battle of Bull Run.” Rejected by the Army, Navy, and Marines for bad eyesight, he was thrilled to go to war in 1918 as a Red Cross ambulance driver.

After being wounded, and winning a medal for trying to rescue a soldier, he spent six months recuperating. Marcelline was seeing a movie back home when she was thrilled to see Ernest in the newsreel. “He was in uniform, sitting in a wheelchair on the hospital porch, being pushed by a pretty nurse,” she wrote. “He smiled at the camera and waved a crutch.” The Hemingway family went to theaters all over Chicago to catch the newsreel as many times as possible.

Sometimes you just want to chuck it all and move to Paris. That’s how travel writer Edwina Hart ended up there after reading Hemingway’s A Moveable Feast in her twenties (a dangerous thing to do when young and unmoored from adult responsibilities). She got an attic studio apartment in Montemarte and proceeded to fall in love with the city, particularly Hemingway’s beloved Shakespeare and Company bookstore.

After losing her apartment, Hart blew into the bookstore as one of its resident “Tumbleweeds” (“a title given to fledgling writers that live in the bookshop for free based on the proviso they ‘read a book a day'”). According to Hart:

Although little writing was ever done, I began to truly feel like a writer. I adopted the French art of flaneuring – wandering around without intention or direction. Armed with observations of Parisian life, I would scribble my thoughts down at street-side cafes or in the shade of chestnut trees in Jardin du Luxembourg (where Hemingway used to hunt pigeons to feed his family). On weekends, Tumbleweeds would make crepes in the kitchen of George’s apartment above the shop. Sunday afternoons were spent attending tea parties run by an octogenarian Welsh poet who regaled us with stories of how George used to cut his hair by setting it alight with a candle, or leave his shop entrusted to an unwitting customer, only to return a week later…

Little writing was ever done. Nevertheless, sometimes it helps to just feel like a writer.

In 1980, Roald Dahl was one of the world’s most famous authors. But when a young Jay Williams wrote a letter to Dahl asking for some writing advice, the author of James and the Giant Peach and The Witches, among other classics, took the time to write back.

Here’s part of what Dahl said:

I have read your story. I don’t think it’s bad, but you must stop using too many adjectives. Study Hemingway, particularly his early work and learn how to write short sentences and how to eschew all those beastly adjectives. Surely it is better to say “She was a tall girl with a bosom” than “She was a tall girl with a shapely, prominent bosom”, or some such rubbish. The first one says it all…

You can see the original letter here.

The young Williams grew up to become a newspaper writer, a job that obviously requires trimming the fat. Williams later said that Dahl’s response was the best advice he’d ever been given.

In this year’s annual New Year’s address, Chinese president Xi Jingping sat in front of a wide array of bookshelves, as always. And as always, viewers scoured the shelves to see what the president is reading. To wit:

Xi is said to be a voracious reader, and other books spotted on his shelf this year included a growing collection of Western classics (from War and Peace and The Old Man and the Sea to The Odyssey and Les Misérables), economic texts like Money Changes Everything by William N. Goetzmann and Michele Wucker’s The Grey Rhino, and numerous titles on Chinese history and military strategy.

Apparently, per his remarks at a Seattle speech in 2015, Xi is also a Hemingway fan:

He said in his younger years he read Alexander Hamilton, Thomas Payne, and…

” ‘I was most captivated by Ernest Hemingway’s The Old Man and the Sea,’ Xi said.

“And that’s not all. When he visited Cuba, the Chinese president said, ‘I dropped by the bar Hemingway frequented and ordered his favorite rum with mint on rocks.’

Interesting. A president who reads. Books. 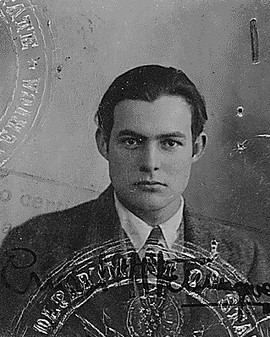 Everybody knows you’re supposed to kill your darilings. But sometimes that’s easier said than done.

It’s summer. Shortcuts are nice. So, next time you’re having a hard time hacking your way out of the verbal underbrush, maybe just use the Hemingway Editor.

You never know. It might get rid of everything you like, and turn your beloved short story into a forlorn piece of faux-Papa prose.

Or, it could show you that less can be more and you didn’t need all that guff to begin with.

Either way, it’s free. What do you have to lose?

Much of a writer’s life is taken up with various anxieties: Where’s the plot going? That paragraph seems a little flat, should I give it another shot? Is the check in the mail?

That means, then, that a lot of what constitutes writing is working through those anxieties, lassoing them to your work as needed.

In A Moveable Feast, Ernest Hemingway described what he did when dead-ended on a story:

Once you have that one true thing, you also have your foundation. 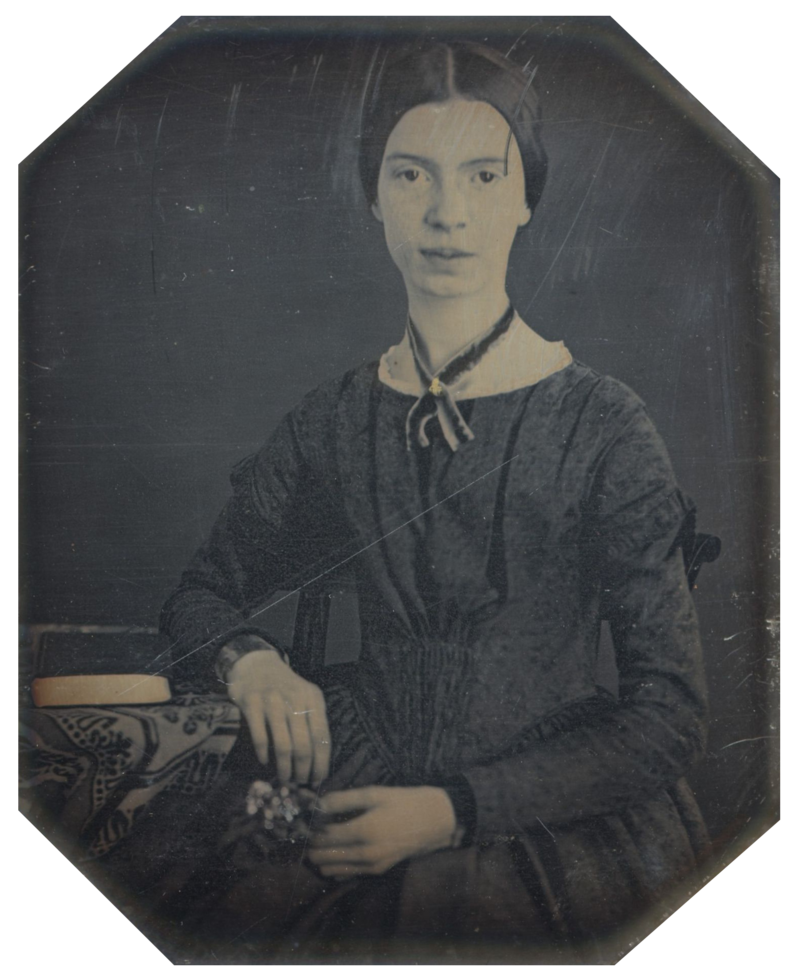 It can be comforting in a way to think that experience matters when it comes to writing. One can’t always be expected to produce great writing if one hasn’t experienced great things, correct? This piece by Adam Kirsch disagrees, particularly when it comes to poetry:

The recipe for poetry involves taking an ounce of experience and subjecting it to a lifetime of distillation; think of the cosmos Emily Dickinson spun out of no more life than would fit in an upstairs bedroom. It is a mistake to think that a person becomes a poet because she undergoes exceptional experiences—because she lives more wildly, intensely, or colorfully than other people. The poet doesn’t feel unique emotions any more than the painter sees unique colors; it is what she does with ordinary emotions that turns them into poetry.

We should remember that many extraordinary writers lived wholly unexceptional lives. Per Kirsch:

…for most of the modernists, the more revolutionary their poetics, the more carefully they concealed themselves behind the manners and professions of the bourgeoisie. T. S. Eliot was a banker when he wrote “The Waste Land”; William Carlos Williams was a family doctor; Marianne Moore, an editor, was a devout churchgoer who lived with her mother.

Hemingway was never the norm. A well-lived life should be its own reward, not just grist for the mill. Honing the craft is what matters, and Dickinson did so quite well from her upstairs bedroom. 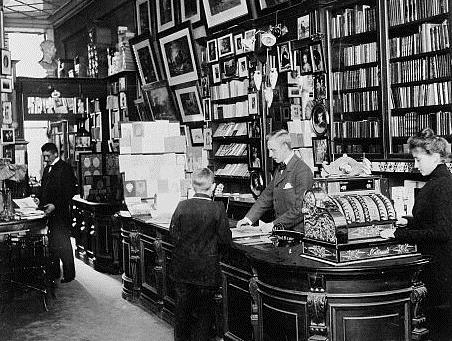 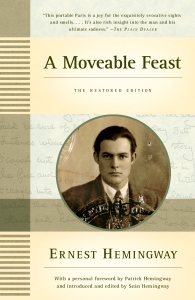 Fans of Ernest Hemingway’s A Moveable Feast love it for its aching and ephemeral beauty. For writers, it’s also a celebration of the craft and (almost more importantly, to some) the lifestyle as it should be enjoyed. For instance:

Now, the book has taken on an extra significance in the City of Lights:

Copies have been laid among the flowers and tributes at the sites of the massacres, and people are reading the book in bars and cafes…

Ernest Hemingway had no problem with expounding on his talent, courage, or general manliness. To nobody’s surprise, this didn’t arise from a well of confidence but rather one of rabid insecurity. Just see his rivalry with F. Scott Fitzgerald, and all those petty little put-downs in A Moveable Feast.

Papa Hemingway also scrapped (albeit in a mildly literary way) with the other big prize-winning author of his time, William Faulkner. They respected each other, but found time to lob critiques back and forth.

When the literary magazine Shenandoah prevailed upon Faulkner to review The Old Man and the Sea, he found room to list Hemingway’s faults but, interestingly, in the context of praising the novel. Here’s an excerpt of that review from Open Culture (emphasis added):

Time may show it to be the best single piece of any of us, I mean his and my contemporaries. This time, he discovered God, a Creator. Until now, his men and women had made themselves, shaped themselves out of their own clay; their victories and defeats were at the hands of each other, just to prove to themselves or one another how tough they could be. But this time, he wrote about pity: about something somewhere that made them all: the old man who had to catch the fish and then lose it, the fish that had to be caught and then lost, the sharks which had to rob the old man of his fish; made them all and loved them all and pitied them all. It’s all right. Praise God that whatever made and loves and pities Hemingway and me kept him from touching it any further.

Makes you want to go back and hunt down all the glories of the novel which too many English teachers have managed to hide.

Late last year, the British writer Olivia Laing published The Trip to Echo Springs: On Writers and Drinking. It’s a rambling and discursive but smart portrait of a half-dozen writers and their struggles with the devil’s brew (Ernest Hemingway, Tennessee Williams, John Berryman, John Cheever, Raymond Carver, F. Scott Fitzgerald). Laing takes her title from a line in Cat on a Hot Tin Roof and indulges in more than a few Williams-ian flights of writerly fancy along the way. Given her twinned love of these writers’ work and her impatience with the romanticism of the drunk author, it’s well earned.

My essay on the book and the author-alcohol phenomenon, “The Drowning Pool,” is at PopMatters:

More than anything else, this is a book of pain and beauty, the former constant and the latter fleeting. It’s awash in water and the attendant metaphors, from the lapping waters of Carver’s rough-and-tumble Pacific Northwest towns to the rivers of glorious and damning booze all of her subjects sluiced down their throats. Laing stabs at and occasionally hits the subject that lies behind it all: Why write and read, after all? Reading the passages left behind in a notebook that lies by Carver’s modest grave, she is awed and lets the reader be awed by “All these anonymous suffering strangers… putting their faith in stories, in the capacity of literature to somehow salve a sense of soreness, to make one feel less flinchingly alone”…

You can read an excerpt from The Trip to Echo Springs here.