In her novel The Mars Room, Rachel Kushner mined the details of her life in San Francisco, specifically growing up on the Pacific side in downmarket Sunset, long before Silicon Valley. Here is how she described it:

The Sunset was San Francisco, proudly, and yet an alternate one to what you might know: it was not about rainbow flags or Beat poetry or steep crooked streets but fog and Irish bars and liquor stores all the way to the Great Highway, where a sea of broken glass glittered along the endless parking strip of Ocean Beach. It was us girls in the back of someone’s primered Charger or Challenger riding those short, but long, forty-eight blocks to the beach, one boy shotgun with a stolen fire extinguisher, flocking people on street corners, randoms blasted white…

Given the litter of specifics there, you can not only imagine the scene but feel Kushner’s tart pride in recalling everything. That same instinct could turn to insult when reading an author who lets their attention slip, doesn’t remember that it was “forty-eight blocks to the beach”.

In Kushner’s essay, “The Hard Crowd,” she writes about her time in Haight-Ashbury, in the detritus of the 1960s, with Oliver Stone shooting The Doors on her doorstep. Sidelining from that, she takes aim at another California-reared scribe, Joan Didion:

Kushner then pens an imaginary letter of complaint:

Record albums are made out of vinyl. Jim Morrison’s pants were leather, and even a Sacramento débutante, a Berkeley Tri-Delt, should know the difference.

Get those little details right. Get them wrong, and a reader who knows will be instantly pulled out of your writing. Possibly never to return.

Do your research, and keep them coming back for more. 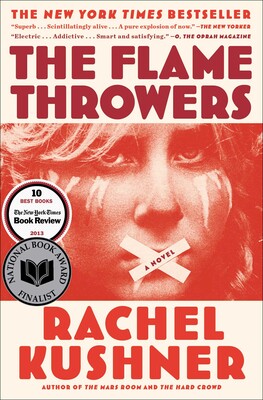 By any definition of the term, Rachel Kushner is a successful writer. Each of her three books—Telex from Cuba, The Flamethrowers, and The Mars Room—have been praised to the skies. At least one of them (The Flamethrowers) is arguably one of the great American novels of the last twenty years.

Nevertheless, she doesn’t believe that she’s in competition with anybody else in the current literary landscape. At least that’s what she told the Times Literary Supplement, when they asked what was the best writing advice she ever received:

To consider myself a destiny. Nietzsche told me it. And from the guy I live with: “Compete with dead authors, not living ones”. (i.e., let history do the sifting work.)

Assume that you’ll succeed in the present. Hope that at some point others agree. Write accordingly.

There’s an old joke about how in Irish families, the boy who can’t throw a ball, well, he’s the priest.

A similar weeding-out procedure is suggested by this line from Rachel Kushner’s brilliant 2013 novel The Flamethrowers:

That’s what artists are, his father said, those who are useless for anything else. That might seem like an insult, he said, but it wasn’t.

So, in other words, run with it.

So here’s who didn’t show at Wednesday night’s National Book Awards dinner at Cipriani in Manhattan: Thomas Pynchon. Never mind that his Bleeding Edge was one of the finalists for fiction, the man just doesn’t do award ceremonies. Or interviews. Or much of anything, besides you know, living and writing.

James McBride (The Color of Water) took the fiction prize in an upset win for his Good Lord Bird and George Packer very deservedly won for The Unwinding (my review is here).

Also at the dinner was E.L. Doctorow, who received the Medal for Distinguished Contribution to American Letters (nice title, that). According to the Times, Doctorow gave the evening a resolutely analog spin:

[Doctorow] cooled the mood down with a somber speech on technology, government surveillance and the Internet. (Somewhat uncomfortably, Amazon.com and Google were sponsors of the event.)

“Text is now a verb,” Mr. Doctorow said. “More radically, a search engine is not an engine. A platform is not a platform. A bookmark is not a bookmark because an e-book is not a book.”