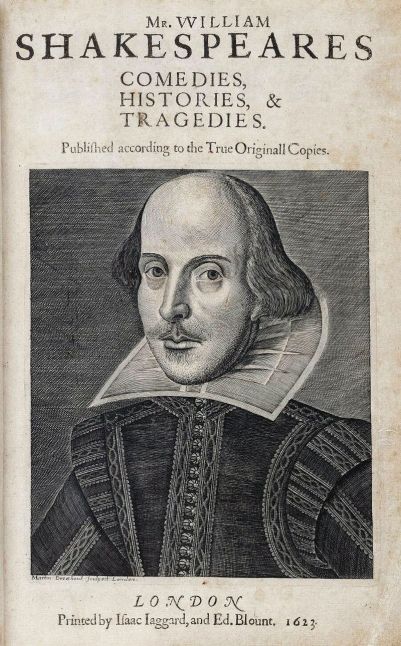 For his essay on the somewhat nonsensical tendency for modern authors to keep reinterpreting the plays of Shakespeare, Adam Gopnik pointed out this about the Bard:

Shakespeare grabbed his stories more or less at random from Holinshed’s history of Britain and Plutarch and old collections of Italian ribald tales. As the “ordinary poet” of a working company of players, he sought plots under deadline pressure rather than after some long, deliberate meditation on how to turn fiction into drama. “What have you got for us this month, Will?” the players asked him, and, thinking quickly, he’d say, “I thought I’d do something with the weird Italian story I mentioned, the one with the Jew and the contest.” “Italy again? All right. End of the month then?” These were not the slow-cooked stories and intricately intertextual fables of the modern art novel.

In other words, we would all do well to remember that even Shakespeare had to write on deadline, for money, and while keeping an eye toward putting asses in seats. He was a great writer, one of our greatest, but a working writer, too.

It’s been awhile since anybody has dared make a film of the Scottish Play. Maybe the curse is finally over? In any case, you could do much worse than Michael Fassbender as the ambitious Thane and Marion Cotillard as the scheming Lady Macbeth.

A new and very atmospheric Macbeth opens this week. My review is at Film Journal International:

Soaked in foggy Highland gloom, Justin Kurzel’s beautifully dour Macbeth is moody and violent to a fault. Nobody cracks a smile and there’s nary a drop of blood spilled that isn’t captured in slow-motion flight like an outtake from some Ridley Scott medieval sword-fest. That’s all on the page, of course. Nobody would say that the Scottish Play had to be done as comedy. But there’s a reason that some adaptations embed a bitter strain of farce amidst all the plotting, haunting, murder and madness. After all, its protagonists spend a good part of the play completely out of their heads and throwing an entire nation into civil war because of what some witches told them. While their delusions have real-life consequences, to take them entirely seriously is to risk missing at least part of the point…

Given how many of us have happily or miserably worked through at least a couple Shakespeare plays in school, not to mention the frequency with which those plays are revived on Broadway and in touring companies everywhere, it’s amazing to think that there was a time when Shakespeare was actually more present in American life than today.

James Shapiro’s new book, Shakespeare in America, tells of how in the early nineteenth century, a quarter of all dramatic productions on the East Coast were Shakespeare’s. To be even moderately cultured, one had to know a few of the soliloquies by heart. To get an idea of how deeply rooted the Bard was in American culture, consider this anecdote, related in the New York Times review of Shapiro’s book, which occurred in Corpus Christi, Texas, in 1846:

To distract the troops, a theater was hastily constructed and a production of “Othello” put into motion. James Longstreet, the future Confederate general, was originally cast as Desdemona, but was judged too tall for the part. The shorter Grant took his place. “He really rehearsed the part of Desdemona, but he did not have much sentiment,” Longstreet later recalled. In the end, Grant was replaced by a professional actress at the insistence of the officer playing Othello, who, Longstreet wrote, “could not pump up any sentiment with Grant dressed up as Desdemona.”

It’s a far cry from the classics-averse mood of the present. But, Shapiro notes, that could be in part because of one thing America has now that it didn’t two centuries ago: great home-grown playwrights of our own.

Filmmakers run all kinds of risks when they try to update the classics; for all the universality of some of the great dramas, they can fail miserably when downloaded into new and sometimes incompatible formats (witness what happens when studios try to dress up Austen and Shakespeare as candy-colored high school comedies). Nadine Labaki’s zesty Where Do We Go Now? has to navigate two minefields: updating Aristophanes’s Lysistrata and setting this comedy amidst modern Lebanon’s murderous religious strife. The result isn’t a new classic, but stands nevertheless as a potent and lively satire about how the violence of men tears societies down and the lengths to which women go to staunch the bleeding…

The Oscar-nominated Where Do We Go Now? comes out today on DVD. My full review is at AMC Movie Database.