In late 1944, J. R. R. Tolkien’s son Christopher–who would later prove so industrious in the keeping-up of his father’s legacy—was away from home, serving with the Royal Air Force in South Africa. J. R. R. had published The Hobbit seven years earlier, and was still in the process of writing his Lord of the Rings trilogy (The Fellowship of the Ring wouldn’t appear in print until 1954). J. R. R. would post draft pages to Christopher as he wrote. 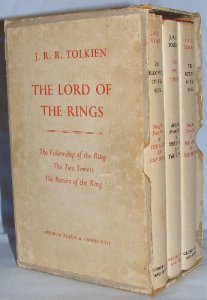 In this letter sent three days after Christmas, J. R. R. talks about his new chapters:

I am glad the third lot of Ring arrived to date, and that you like it—although it seems to have added to yr. homesickness. It just shows the difference between life and literature: for anyone who found himself actually on the stairs of Kirith Ungol would wish to exchange it for almost any other place in the world, save Mordor itself. But if lit. teaches us anything at all, it is this: that we have in us an eternal element, free from care and fear, which can survey the things that in ‘life’ we call evil with serenity (that is not without appreciating their quality, but without any disturbance of our spiritual equilibrium)… I am afraid the next two chapters won’t come for some time (about middle of Jan) which is a pity, as not only are they (I think) v. moving and exciting, but Sam has some interesting comments on the rel. of stories and actual ‘adventures’. But I count it a triumph that these two chapters, which I did not think as good as the rest of Book IV, could distract you from the noise of the Air Crew Room!….

More of the letter can be found at the American Reader‘s “This Day in Letters” feature.