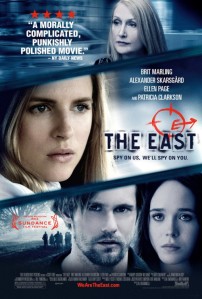 In the new eco-spy-thriller The East, a private investigator is sent to infiltrate an anarchist cell. It’s a smart piece of work with impressive performances all around (Alexander Skarsgard, Patricia Clarkson in particular), but a slightly disappointing effort from director Zal Batmanglij, who wowed with last year’s astounding debut Sound of My Voice.

The East opened last Friday in limited release and will be expanding around the country over the summer.

My review is at Film Racket; here’s part of it:

Batmanglij’s co-writer Brit Marling plays Jane, a former FBI agent hired by a private intelligence firm as an investigator. Her first assignment is to infiltrate The East, an underground environmental activist cell that’s been targeting corporate executives they accuse of spreading pollution and disease. Jane dyes her hair blonde, gets tossed a pair of Birkenstocks by her new boss Sharon (an even flintier than usual Patricia Clarkson), and heads out to gather intelligence on The East for the firm’s corporate clients. A few nights of eating out of dumpsters and hopping freight trains later, she’s face to face with The East. They turn out to be little like the expected ranting radicals…