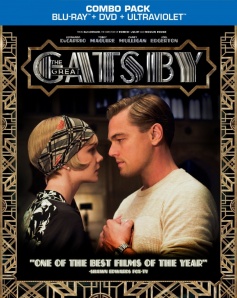 The first and biggest movie spectacle of the 2013 summer movie season had nothing to do with IMAX superheroes, but a genre-blending half-musical Baz Luhrmann adaptation of F. Scott Fitzgerald’s The Great Gatsby. Sound like a refreshing change of pace? It should have been. Unfortunately the result was more like a feature-length trailer for a movie that never quite arrived.

The Great Gatsby hits DVD and Blu-ray. My review is at Short Ends & Leader:

Luhrmann’s take on F. Scott Fitzgerald’s Jazz Age fable is all about trying to make it seem as “modern” as possible; a story gambit that makes sense, given the current economic climate. Of course, the one percent’s current Gilded Age just kept on trucking after the Great Recession, unlike the excesses of the 1920s fantasized about so lovingly in Gatsby, which were put on ice by the Great Depression. To that end, Luhrmann comes to the story armed not with a respectable screenplay, great location scouts, and the best actors he could find but a war chest of whizbang computer graphics, some pretty faces, and executive music producer Jay-Z. It’s gonna be a show, kids!…