Tonight, HBO is premiering the first episode in its six-part true-crime documentary The Jinx: The Life and Deaths of Robert Durst. It’s a stranger-than-fiction tale from director Andrew Jarecki (Capturing the Friedmans) who first tried to tackle the curious case of Durst with 2010’s fictional film All Good Things, where Ryan Gosling played Durst, heir to a massive Manhattan real-estate fortune, who was accused of killing his first wife Kathleen, who disappeared in 1982. 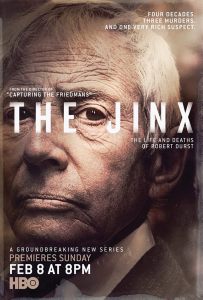 My review of the first two episodes is at PopMatters:

There’s no straight line through Robert Durst’s story. Instead, there is a curlicue leading from a privileged Manhattan childhood to Dynasty-style power struggles, a lengthy stretch of cross-dressing, and potential connections to three murders. The baffling particulars of Durst’s case and his resolute odd-man-out nature come with the added coating of unreality provided by a life of extreme wealth. It’s a captivating story, and a difficult one to tackle without succumbing to its and his Sphinxian spell. Fittingly, the first two episodes of Andrew Jarecki’s six-part documentary, The Jinx: The Life and Deaths of Robert Durst, don’t reveal whether or not it will succumb…