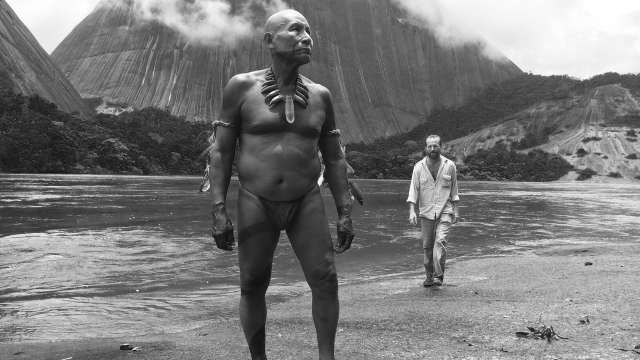 In Embrace of the Serpent, the partially real, highly imagined stories of two white explorers in the Amazon rain forest are threaded into a kaleidoscopic journey into the last days of a pre-modern civilization.

Embrace of the Serpent opens in limited release this week. My review is at Film Journal International:

Further research would be needed to prove this theory. But it’s probable that nowhere in the writings of Theodor Koch-Grünberg (1872–1924) and Richard Evans Schultes (1915–2001) would you find evidence of a cultish colony fixated on flagellation and crucifixion. Ciro Guerra’s ambitious bolting together of imagined quests by these two real-life explorers adds a lot of that kind of sinister, quasi-Conradian color, but it’s mostly to positive effect. Even though Embrace of the Serpent’s sometimes violent and frequently otherworldly journey up a jungle-bounded river can’t help but echo Coppola and Herzog, Guerra pursues his own path in striking fashion…