During Chelsea Clinton’s speech at the Democratic convention on Thursday night, she peppered her recollections of childhood in the Clinton family with a couple pointed references to books. In addition to the expected childhood classics (Goodnight, Moon) she singled out a certain novel by Madeline L’Engle:

Growing up, conversations around the dinner table always started with what I learned in school that day. I remember one week talking incessantly about a book that had captured my imagination, “A Wrinkle in Time.” Only after my parents had listened to me talk, would they then talk about what they were working on: education, health care consuming their days and keeping them up at night. 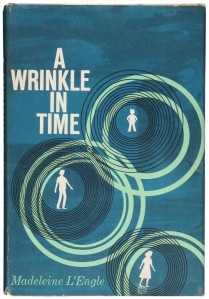 Spencer Kornhaber writes, this wasn’t just an invocation of a classic book beloved by many pre-adolescents, it was a clue as to the personalities of both Chelsea and Hillary:

The parallels between Meg Murry [the book’s protagonist] and adolescent Chelsea Clinton are obvious from that quote alone, right down to the description of braces and unruly hair … Meg is an introverted, brainy heroine rather than a spunky, hotheaded one, a distinction that likely appeals to both Clinton women. And Meg, like Chelsea, is the daughter of two very high-powered parents … There are extra-textual comparisons to be made, too: L’Engle once said that the novel was originally rejected by dozens of publishers, partly for the reason that it “had a female protagonist in a science-fiction book, and that wasn’t done”—a gender barrier of a different sort than the one broken last night…

Clinton’s reference to L’Engle’s novel was greeted by a distinct cheer from a certain segment of the audience. You can imagine for yourself whether a similar literary call-out at the previous week’s convention would have elicited anything but silence.