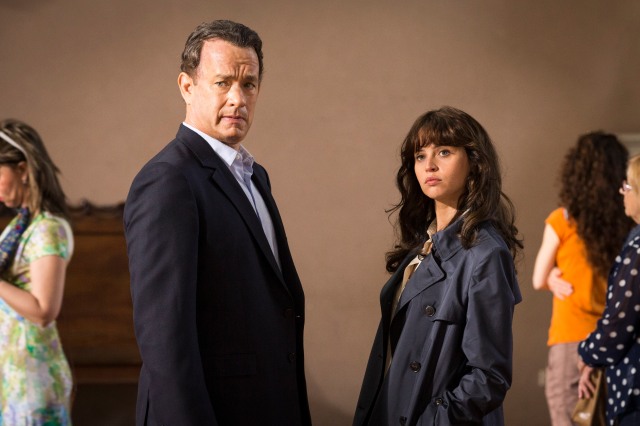 Well, another year, and another Dan Brown thriller comes to the screen. That would be Tom Hanks on the left as Harvard symbologist Robert Langdon, and Felicity Jones on the right as his latest brunette sidekick. This time out, Langdon’s hot on the trail of a genocidal madman who loves Dante and wants to destroy humanity. To Florence!

Inferno opens wide this weekend. My review is at Film Journal International:

“It’s good to have you back, Professor,” says Sienna Brooks (Felicity Jones) to Robert Langdon (Tom Hanks) as they dash toward another stage in the latest Ron Howard-directed Dan Brown symbological scavenger hunt. She’s right. Hanks may not be exactly “America’s dad,” as he spoofed in a recent “Saturday Night Live” skit (“How ya doin’, champ?”), but there remains a reason that he’s one of Hollywood’s most bankable stars. As Langdon, the Harvard symbologist (still not a real job) who gets sucked into world-changing conspiracies with the regularity of “Murder, She Wrote”’s Jessica Fletcher, he’s usually the smartest guy in the room but only broadcasts it when there’s a need for some expository lecturing…