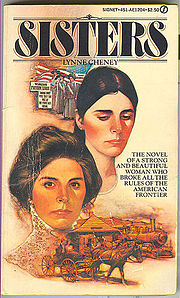 Princeton professor, literary critic, and feminist theorist Elaine Showalter has written and opined on everything from how to teach literature to the psychological basis of modern hysterias. She was also, as a member of the Modern Language Association, a skirmisher in those not-at-all-missed culture wars of the early-1990s when the MLA pushed back against charges that the National Humanities Council was using conservative ideology to vet grant applications. The NEH’s chair? Lynne Cheney, wife to the former vice president and mother of the two battling Cheney sisters.

So it came to Showalter’s surprise back then that such an ideologue like Lynne Cheney had, in her earlier incarnation as a pulp novelist, published a novel about battling sisters that could actually be considered … feminist. Showalter wrote in the New Republic about the dissonance between anti-feminist scourge Lynne Cheney and the Lynne Cheney who had a PhD in English and wrote a trashy novel about strong women working together.

…I thought it was ultimately a metaphor for the profound differences between women, and the impossibility of achieving total sisterhood. But Cheney sees empathetic identification as the essence of sisterly behavior. “The hardest thing any human being can do,” a woman in the novel declares, “is fully to acknowledge the actuality of another. To admit, truly admit, that their thoughts, cares, their ardors and aversions, are—or were—as real as our own.” When Sophie understands this idea, she realizes that she and Helen were not so different after all. If Liz and Mary Cheney read Sisters as they were running towards the future, I hope they remembered these lines. If these two professional, Republican, married-with-children twigs on the Cheney family tree can’t get along, who can?