Challenging the critical consensus that’s been gathering around The Revenant, Spotlight, and Carol for best film of the year, Online Film Critics Society—which includes yours truly among its members—voted yesterday that the year’s best film was in fact … Mad Max: Fury Road. One could theoretically argue that George Miller’s action film had just as much to say about the human condition (folly, greed, short-sightedness, environmental collapse) as those other films, only with the added bonus of explosions and many, many crashing cars. But that’s a discussion for another time.

New York Film Critics Online, which generously includes yours truly among its membership, voted today on our best films of 2015. Unlike some years, when the opinion coalesces around two or three different films, this time only one film garnered multiple awards. That would be Tom McCarthy’s incredible eye-opener Spotlight, about the Boston Globe reporters who uncovered the Catholic Church’s decades-long coverup of widespread abuse by Boston priests. It won in four categories, including best picture.

And here is our list of the year’s 10 best films, in alphabetical order (yes, that’s right, one of them is Mad Max, as it should be): 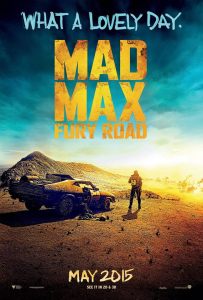 Mad Max: Fury Road (aka, the fourth one) is playing pretty much everywhere now. My review is at Short Ends & Leader:

A demolition derby of a chase scene occasionally interrupted by scraps of crackpot wit and Aussie slang-strangled dialogue, Mad Max: Fury Road burns through ammunition and fuel with abandon. You would think that the characters were video-game avatars possessed of endlessly replenishable digital supplies, not the starving and sickly remnants of humanity barely surviving in a post-apocalyptic wasteland. Unlike many action films, though, where such profligacy is determined by need for trailer-ready action beats, here it’s central to the film’s story and message…

Here’s the trailer, dig it:

With awards season just around the corner, studios big and small are finishing their late summer/early fall product dump. Here’s a quick rundown of reviews I’ve written on some other releases that have mostly gone unnoticed:

Bounty Killer — A post-apocalyptic, Mad Max knock-off with tongue planted firmly in cheek. C+ for effort; not as funny as it thinks it is. Review here.

Symphony of the Soil — Ever wonder what the difference is between soil and dirt? No? Review here.

The Dirties — Intriguing faux-documentary story about a kid making a movie about taking revenge on the school bullies. Starts off as gimmick, turns into uncomfortably close-to-home comment on violent media saturation. Worth seeking out. Review here.