New in Theaters:
The Adjustment Bureau 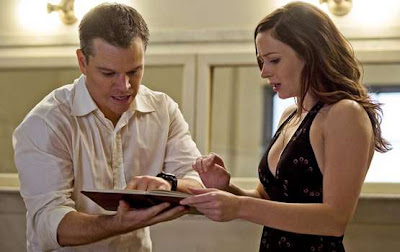 A quasi-theological chase flick that nearly transforms into a full-blown romance, Bourne Ultimatum scribe George Nolfi’s writing/directing debut bucks the trend of Philip K. Dick film adaptations by not emphasizing the brain-snapping paranoia of his work. Instead, Nolfi takes an approach that’s both lighter in tone and yet more substantive in its core story than mind games like Minority Report and Total Recall. There’s little in the way of dark shadows or bloodshed, but at the same time, the entire world is at stake…
The Adjustment Bureau opens wide tomorrow. You can read the full review at filmcritic.com.