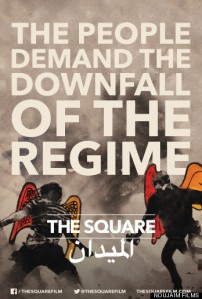 Jehane Noujaim’s incandescent documentary about the Tahrir Square revolution first played Sundance back in January; she went back to Egypt to shoot later developments. The version of The Square that just opened in limited release now has a dramatic arc, from the 2011 resignation of Mubarak to this summer’s coup that toppled Morsi. It’s an elegantly put-together and passionate story of the tragedy of revolutions and the resilience of ideas.

The film is thick with dense collages of tear gas, gunfire, and seas of people leaping and shouting in unison. But it also cuts away to zoom in on a few of these people who would otherwise just be specks in a pointillist portrait. What Noujami has captured is not just a protest, but a diagnostic of the different emotional and political struggles which protesters like Khalid, Ahmed and Magdy are having in the street or on the phone because they don’t live in a country where those arguments can yet be honestly had at the ballot box.