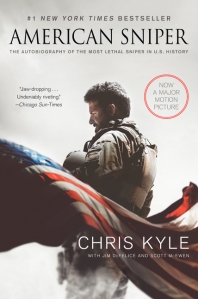 Before Chris Kyle was murdered at the age of 38, he had amassed a legendary kill record as an army sniper; possibly the most lethal one in American military history. His bestselling memoir, American Sniper, was originally planned as a Steven Spielberg project, but the film was ultimately directed by Clint Eastwood, no stranger to squint-eyed dramas of force and will.

Bradley Cooper is rarely the sort to grab one’s attention at center stage; he only truly lights up films like American Hustle or The Hangover series when there’s a co-star for him to bounce his nervy patter and blue eyes off of. But Cooper’s performance as Kyle delivers the proper mix of humility and bottled-up frustration called for in a soldier from whom so much is expected. The film starts off with Kyle on a rooftop in Iraq, covering a column of Marines advancing through a city. He sees a woman hand a grenade to a young boy, who runs with the weapon towards the Marines. No other soldiers have eyes on the pair. His spotter reminds him that if he gets it wrong, “they’ll burn you”…