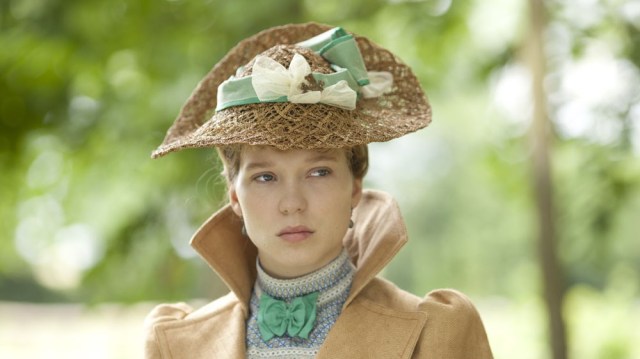 In Octave Mirbeau’s scandalous 1900 novel, Diary of a Chambermaid, he uses the exploits of a canny maid unencumbered by bourgeois morality to satirize the hypocrisies and power games of French society. It’s been filmed a couple times, most famously by Luis Bunuel with Jeanne Moreau in the title role.

Benoît Jacquot’s new version stars Léa Seydoux (Blue is the Warmest Color) and is playing now in limited release. My review is at Film Journal International:

The loathsomeness of humanity is so thickly painted in this latest adaptation of Octave Mirbeau’s satirical novel that by the time anti-Semitism and murder rear their head, they almost can’t bring the film’s opinion of its characters any lower. That isn’t to say that director BenoîtJacquot doesn’t relish watching his players scheme and plot their way around hard work or simple decency. In this world, fin de siècle French society is a rigged game. Those not born to its few crucial advantages of money or place have to do what they can to survive. Of course, many don’t put as much into that struggle as his manipulative heroine Célestine (Léa Seydoux), who hasn’t met a corner she didn’t cut or an angle she didn’t play…