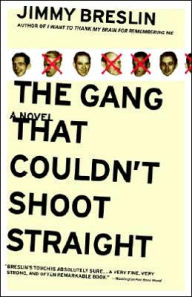 We lost the great Jimmy Breslin this past week. A shoe-leather New York scrivener who banged out columns and books and snazzy oratory since the 1940s, Breslin made the ink-stained wretches in The Front Page look like hacks. He was the writer you thought of when you heard somebody say, “They don’t make ’em like that anymore.” This was the guy who could explain the soul of the city in a tear-inducing newspaper column and then go run for mayor with Norman Mailer on a lark.

A lot of people in New York had Breslin stories. One of the better remembrances this week came from Mohamad Bazi, who was a co-worker of Breslin’s at Newsday in 2003. Bazi was covering the Iraq War when he got an overseas call from Breslin, who wanted to compliment him on an article he’d written:

‘But you know, your lead could have been stronger,’ he said. ‘Sometimes you gotta hit ’em over the head.’ Then he asked why I broke up some paragraphs. I grumbled something about the editors.

‘What?’ he shouted. ‘Don’t let ’em [expletive] with your copy. You’re there in Iraq, and they’re sitting behind a [expletive] desk.’

Whether you’re embedded in Iraq or blogging from Buffalo, the advice couldn’t be better. Do the work. Tell the truth. Write it snappy.

And don’t let ’em [expletive] with your copy.