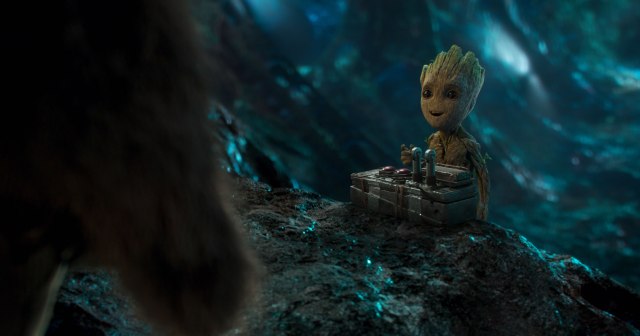 The summer movie season is already started, thanks to The Fate of the Furious. But now it gets going in style, with the sequel to James Gunn’s Guardians of the Galaxy hitting theaters next Friday.

The anticipation couldn’t be higher for Gunn’s sequel, a movie that depends on being nimble on its feet. Those expectations are met, and then some, in a bigger, bolder outing that locks the audience in from a credits sequence in which Baby Groot (a computer-modulated Vin Diesel) boogies ever so cutely to ELO’s “Mr. Blue Sky” while barely avoiding being squished by the multi-tentacled monster fighting the Guardians in the background. The choice of starting a summer blockbuster by focusing on the teeny dancing sentient tree instead of the monster battle with jet packs and lasers taking place mostly off-screen might seem odd to some. But, as is said later on in, Baby Groot is just “too adorable to kill”…