A nearly sure-fire debt for some awards in both acting and design categories is Guillermo del Toro’s ravishing fairy-tale romance The Shape of Water, which is playing in theaters now.

The Shape of Water is ostensibly a love story between a solitary woman and a merman. But the true object of the movie’s affection is its star character, Elisa Esposito (Sally Hawkins), and rightly so. Elisa is just about the fiercest woman on screen right now; a less complicated but no less determined heroine than Frances McDormand’s blowtorch vigilante Mildred in Three Billboards Outside Ebbing, Missouri. A mute cleaning woman who lives above a grand old movie palace, she has a closely-followed a litany of daily habits that are treated more like chiming celebrations than rote compulsiveness…

The movies of Bong Joon Ho (The Host, Snowpiercer) keep getting odder and less predictable; mostly for the better. His latest, Okja, is a story about a girl and her pet monster who get ensnarled in a byzantine corporate conspiracy featuring a mad-hatter turn from Tilda Swinton.

Okja opens in theaters and on Netflix on June 28. My review is at PopMatters:

South Korean filmmaker Bong Joon Ho has said that Netflix, the distributor of his new movie Okja, gave him final cut. That’s easy to believe. Because most studios, having spent some $50-odd million on a movie mostly about the relationship between a spunky young girl and her gentle giant pig, would have serious issues with the dark curve balls that Boon throws into a story thrumming with such strong, box office-friendly child-creature empathy. But Netflix is charting its own path in the current chaotic state of theatrical movies and for now, part of that means letting an artist like Boon do just what the hell he wants. (This open-wallet policy also means Netflix bankrolling the likes of Adam Sandler for now, but that’s for a different time.) Given what’s on screen in Okja, this is a welcome development… 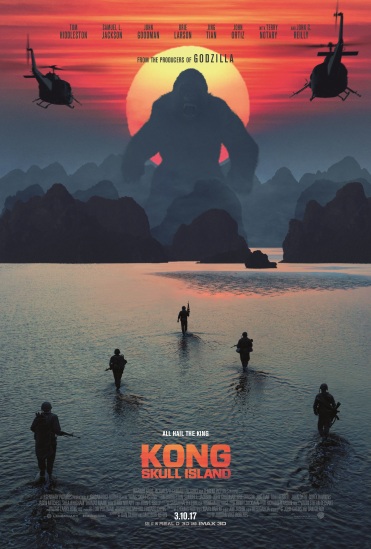 It’s been a few years since King Kong was smashing up the planet. Fortunately, the makers of Kong: Skull Island have remedied this problem with a half-gonzo reworking of the old giant apt smash-’em-up material set in the waning days of the Vietnam War.

Kong: Skull Island is opening wide this week. My review is at Film Journal International:

This is a movie so eager to show off its skyscraper-sized primate that it trots him out before we’ve even gotten to the credit sequence. In this iteration’s 1944-set opener, two downed fighter pilots (American and Japanese) parachute onto a tropical island beach and set about trying to kill each other before being interrupted by Kong’s glowering eyes…