My review of the new Netflix true-crime series Night Stalker ran at Slant:

Netflix’s Night Stalker: The Hunt for a Serial Killer, a four-part series about Richard Ramirez, the sadistic serial rapist and murderer who terrorized the citizens of Los Angeles and San Francisco in the mid-1980s, is dramatically satisfying but structurally rote. Director Tiller Russell glosses the story over with more cinematic panache than you might see on 48 Hours, all straight from the Southland-noir template, including eerie tracking shots of a full moon behind dark palm trees and Michael Mann-ish overhead views of nighttime highways. But despite a story filled with big-hearted good guys, a depraved villain, and an edge-of-your-seat finale, the series feels overly pat and formulaic…

In the new movie from Ramin Bahrani (99 Homes, Fahrenheit 451), a kid from a dirt-poor Indian village discovers the price that must be paid to move up the social ladder. Based on the fantastic novel by Aravind Adiga, The White Tiger is coming to Netflix later this month.

Narrating the film’s fast-paced plot with sly showmanship, Balram (Adarsh Gourav) lays out the humiliations that he endured and sins he committed in his rise from a poor Indian villager to a Bangalore entrepreneur. The speed of his change in circumstances, and his canny maneuvering of class differences, brings to mind everything from Charles Dickens to Danny Boyle’s Slumdog Millionaire. But as Balram pointedly says in one of his many asides to the audience, after witnessing yet again the powerlessness of the poor, “don’t think for a second there’s a billion-rupee gameshow you can win to get out of it.” Instead, his escape route is through the rich family that he sacrifices everything to work for…

Now that the only way to see Broadway is on TV, it’s a good thing that Netflix is getting in on the theater game. Next week sees the release of the star-heavy adaptation of the 2018 musical The Prom.

Turning a high school dance into a crucible for a showdown about acceptance and homophobia via some high-kicking dance numbers and tongue-in-cheek humor feels like a reimagining of Ryan Murphy’s Glee. Now that Murphy has adapted the musical for Netflix, the process has come full circle, though not always in a good way…

In this Italian-set adaptation of Romain Gary’s novel The Life Ahead, a Holocaust survivor (Sophia Loren) and a 12-year-old Senegalese orphan (Ibrahima Gueye) find common cause despite a rough first meeting when he steals her pursue.

The Life Ahead will be available on Netflix this Friday. My review is at Slant:

The Life Ahead transfers the story from Paris to the southern Italian seaside town of Bari, whose palm trees and buttery sunshine contrast with the hardscrabble realities of life for the characters. The star of the piece is ostensibly Sophia Loren, who brings a combative hauteur to the role of Madame Rosa, an Italian-Jewish survivor of Auschwitz and former streetwalker who runs a kind of ad-hoc nursery for the children of her colleagues out of her apartment. While presenting herself as diamond-hard, Rosa is beginning to chip a little around the edges, and more in need of a friend than she would admit…

Rebecca is playing now in some theaters and also on Netflix. My review is at Slant:

Getting a limited theatrical opening (whatever that means in pandemic times) before coming to Netflix in October, Aaron Sorkin’s The Trial of the Chicago 7 dramatizes the story of the biggest, oddest political show trial of modern American history. Also: Sacha Baron Cohen plays Abbie Hoffman.

Aaron Sorkin’s The Trial of the Chicago 7 pulses with relevancy in a time when high-stakes debates over authoritarianism, protests, and the necessity of radicalism are convulsing America. Sorkin uses an ensemble approach to tell the story of the anti-war activists charged with conspiracy and incitement to riot after the street fighting that ripped through Chicago in August 1968 during the Democratic National Convention. While necessary, given the number of key characters involved, the approach also allows Sorkin to establish different factions among the defendants who are debating the merits of their wildly varying methods to the same cause even as they’re fighting to stay out of federal prison…

Based on Greg Rucka’s comic-book series, The Old Guard is a big-budget attempt to start a new action franchise, this one centered around a band of centuries-old mercenaries who are (mostly) immortal.

The Old Guard launches today on Netflix. My review is at Slant:

In the 1990s, the Castro regime sent several operatives to infiltrate the Cuban-American emigre community in Miami. Olivier Assayas’ Wasp Network is a fictionalization of that somewhat forgotten sidenote of the post-Cold War years.

Wasp Network is available on Netflix today. My review is at Slant:

Based on Fernando Morais’s 2011 book The Last Soldiers of the Cold War, the film starts out as a crisply paced, lavishly photographed, and character-based study of what the members of the so-called “Cuban Five” spy ring did and how they did it. Unfortunately, it spreads its attentions so wide and at times without consequence that the import of the events it depicts starts to get lost…

In Martin Scorsese’s The Irishman, Robert De Niro plays Frank Sheeran, a reputed hitman who charts a course through a baroque landscape of postwar American intrigue, crime, and paranoia.

The Irishman is playing in a few theaters now, as well as on Netflix. My article about it is at Eyes Wide Open:

Based on Charles Brandt’s book I Heard You Paint Houses, about the decades Sheeran spent as a Zelig-like mob enforcer and assassin,The Irishman is one of the more curious and hard-to-pigeonhole gangster movies that Scorsese has ever done. Pulling back from the music-strobed buzziness of Goodfellas and Casino, and worlds away from the Nouvelle Vague/Cassavetes jitters of Mean Streets, it’s a cool, elegiac, and somewhat detached epic whose three and a half hours float by with a disconcerting calmness… 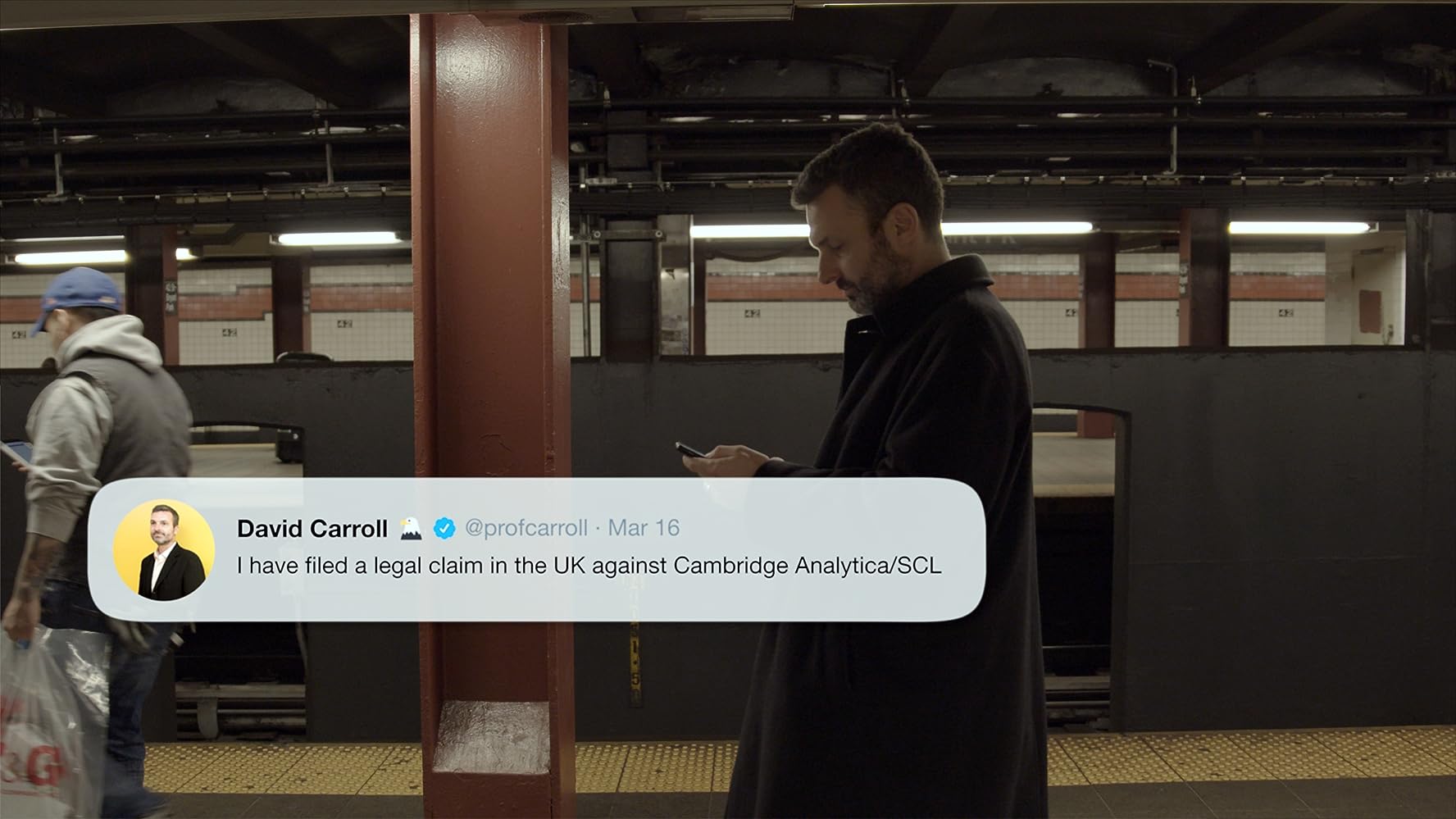 Taking a break from true-crime documentaries (the Paradise Lost trilogy, among others), Joe Berlinger directed a narrative adaptation of Elizabeth Kendell’s book The Phantom Prince, about her relationship with the serial killer Ted Bundy.

My review of Berlinger’s Extremely Wicked, Shockingly Evil and Vile, running now on Netflix, was published at Eyes Wide Open:

Of all the serial killers who entered the lexicon of American culture over the past half-century, Ted Bundy, who confessed to over two-dozen murders committed in the 1970s and was executed in 1989, remains something of a standout. The likes of the Zodiac Killer, Jeffrey Dahmer, or Dennis Rader (aka the BTK) have shocked for many reasons, most particularly their depravity and ability to elude capture. Bundy, or at least the legend of him, followed a different trajectory…

Fyre was supposed to be the great music festival of 2017. Instead it turned into a social media schadenfreude disaster. Now Chris Smith (of American Movie fame) made a documentary out of it. Sometimes we get lucky that way.

Fyre opens in limited release and will be available on Netflix this Friday.

The video ads for the Fyre Festival looked amazing when they first rippled through the Instagram feeds of influencer models like Bela Hadid and Emily Ratajkowski in late 2016. For a certain kind of status-seeker, marooned somewhere cold and just waiting for the next warm-climate EDM gathering, the marketing for the music festival promised a bro heaven populated only by models…

The latest movie from Susanne Bier (The Night Manager) is a postapocalyptic horror story starring Sandra Bullock and John Malkovich.

My review is at Slant Magazine:

Needing to avoid psychotic zombies isn’t the only danger faced by the harried survivors of an unspecified pandemic at the start of director Susanne Bier’s adaptation of Josh Malerman’s novel Bird Box. The hard-as-nails Malorie (Sandra Bullock) and her two five-year-old wards must also manage navigating a postapocalyptic wilderness while wearing blindfolds. Oh, and they’re in a boat on a fast-running mountain river with rapids approaching. Also, they’re threatened by invisible monsters who can only be spotted when nearby birds start chirping and who cause instant suicidal tendencies in those who look their way. Things aren’t looking good for the trio…

The new documentary The American Meme isn’t really about memes, it’s about people who either make their living on social media or just spend far too much time there (Paris Hilton, DJ Khaled, etc.). It’s available on Netflix this Friday.

My review is at Eyes Wide Open:

[Marcus] mixes big sprays of social media content, from jabbing comedy videos to jealousy-inducing lifestyle-porn stills, with influencer interviews. The results cover the gamut from self-congratulatory spin (the social media-drenched DJ Khaled, who seems hell-bent on turning his existence into a bling-encrusted Truman Show) to self-immolating destructive toxicity (onetime photographer turned misogynistic party-dude troll Kirill Bichutsky, aka @slutwhisperer). It’s a glitzed-up ugly slew of fetishized consumerism and champagne-splashed Girls Gone Wildness, all captured in the hope that somebody out there will drop their thumb over the Like button before wandering deeper into the wilds of the Internet…

Hold the Dark is playing now in limited release and on Netflix. My review is at Film Journal International:

Jeffrey Wright never shows up to deliver good news. It would be nice if someday soon he gets to show up in a Judd Apatow movie. Suffice it to say that when Wright appears at a woman’s doorstep in Jeremy Saulnier’s gruesomely bleak Hold the Dark, it’s not to deliver a check from Publishers Clearing House…