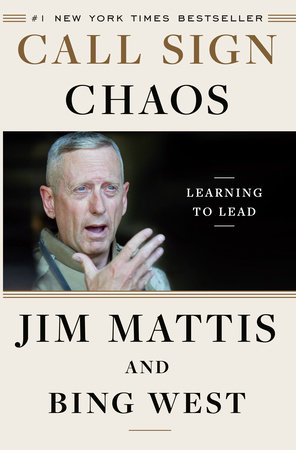 Former Secretary of Defense Jim Mattis, one of those adults we keep being told are keeping things in the White House from being even worse than they are, has a new book out: Call Sign Chaos.

If this essay in the Wall Street Journal, which Mattis and his co-author Bing West adapted from the book, is any sign, there is much he is not saying in the book. To wit, this section on how he dealt with an unnamed admiral who harshly and indiscriminately mocked his subordinates:

I called in the admiral and carefully explained why I disapproved of his leadership. “Your staff resents you,” I said. “You’re disappointed in their input. OK. But your criticism makes that input worse, not better. You’re going the wrong way. You cannot allow your passion for excellence to destroy your compassion for them as human beings.” This was a point I had always driven home to my subordinates.

“Change your leadership style,” I continued. “Coach and encourage; don’t berate, least of all in public.”

But he soon reverted to demeaning his subordinates. I shouldn’t have been surprised. When for decades you have been rewarded and promoted, it’s difficult to break the habits you’ve acquired, regardless of how they may have worked in another setting. Finally, I told him to go home.

There is no indication in this exercise in avoiding the elephant in the room that Mattis ever suggested that the commander in chief should consider not berating or demeaning people, much less just going home.

In the new thriller from Gavin Hood (Rendition), Keira Knightley plays the real-life whistle-blower who tried to stop the UK from bending to US pressure to cook up intelligence to justify the invasion of Iraq in 2003.

Based on Marcia and Thomas Mitchell’s book The Spy Who Tried to Stop a War, Official Secrets opens this week. My review is at PopMatters:

This is usually a time of drudgery, when sloppy comedies and stupid worn out action franchises waste everyone’s time. So it comes as a nice surprise to watch a corker like Gavin Hood’s unexpectedly jarring and immediate espionage thriller Official Secrets unspool in a close, carefully calibrated way that actually grabs one by the conscience…

“Tango ‘Til They’re Sore” by Tom Waits. As visually interpreted by Rowlf (originally a Jim Henson interpretation of a Waits-ian pianoman), Kermit, and the Muppet gang. In black and white, of course:

Some days it comes. The words flow, you forget to look up, and before you know it, the whole morning has passed and you have five good new pages.

Some days it does not. Nothing comes. Everything sounds terrible. You write and delete and rewrite the same two lines before getting up and going for a walk.

Still, the desk remains. The page needs to be filled. How? No easy way around it, per screenwriter Akiva Goldsman:

Successful writers don’t wait for the muse to fill themselves unless they’re geniuses. I’m not a genius. I’m smart, I have some talent, and I have a lot of stubbornness. I persevere. I was by no means the best writer in my class in college. I’m just the one still writing…

Chances are, you are not a genius (no offense).

So, failing that, just keep at it. Be the tortoise.

And stop looking out the window.

My review of Charlie Jane Anders’ novel The City in the Middle of the Night was published at Rain Taxi Review of Books:

The City in the Middle of the Night, is precisely the kind of novel that benefits from being called speculative fiction rather than science fiction, which can still seem pejorative to some readers. So far, “speculative fiction” seems not to scare off genre-unfriendly readers, meaning Anders may attract the kind of broad readership she deserves with this bristling and vivid book…

According to novelist Maria Semple, when her first novel, This One is Mine, came out, the notices were good but the sales were not. So she retreated into herself, stopped writing, and blamed everything and everybody but herself.

Then one day, a friend told her something:

Maria, you’re a writer. Writers must write. If you don’t write, you’ll be a menace to society.

That line later showed up in her novel, Where’d You Go, Bernadette?

It’s good advice. In fact, one could use the reverse of it as something of a test. If you don’t write for an extended period of time, and feel just fine about that, then maybe writing is just something you do, and not a vocation.

Not to mention a generally healthier way to live.

Once upon a time, Bernadette was a rising ingenue in the architecture world, with a knack for quirky science-fiction designs and looking dazzling in old photographs (the bangs and artfully dangled cigarettes help). Her career was then sidetracked by a catastrophe that the movie withholds until far too late in the process. By the time we catch up with her, she has become a fierce recluse. Living in a damp and vine-riddled hilltop Seattle manse that she keeps up like some horticulturally-minded relative of the Addams Family…