Now that we’re almost to January, it’s time to take a look back at the year that was, movie-wise. My accounting of the best movies to hit screens, big and small, in 2018, was published at Eyes Wide Open:

The more things changed at the movies in 2018, the more they stayed the same. The year’s biggest box office hit was Marvel’s Black Panther, which finally smashed the old rule that white actors were required to head up superhero stories. Crazy Rich Asians proved that perfectly mediocre romantic comedies (which should not be taken as a criticism, it’s been a moribund genre for a while) didn’t require white casts for relatability; glossy shopping montages and feisty showdowns between a bride-to-be and her fearsome future mother-in-law translate across all cultures…

My essay on the ever-more sprawling world of movie franchises, “Sequel Summer: Deadpool Fights Thanos in Jurassic World,” is at Eyes Wide Open:

After banking a billion-plus revenue from Black Panther, Disney kept the Marvel machine humming with the late April release of Avengers: Infinity War. The first half of an apocalypse two-parter, this was less a standalone movie than a short-attention-span episode of a long-running series that was running out of ways to keep engineering conflict. Infinity War: Part One didn’t even bother establishing itself as a standalone movie like Black Panther did. It just dumped every available Marvel hero into a Battle Royale against Thanos, a big dull dud of a genocidal villain, and made sure to string it out to next summer’s sequel. Spider-man, Doctor Strange, the Hulk, Thor, and Nick Fury? Sure! How about Guardians of the Galaxy, too? Why not?…

There’s an exhibition right now at the Museum of Contemporary Photography in Chicago called “In Their Own Form.” According to the museum, it explores “the myriad ways blackness might hope to exist without the imposition of oppression, racism and stereotypes ever-present in Western cultures, mediated through Afrofuturist themes including time-travel and escapism.”

The Guardian had a simpler take, titling its piece “Before Black Panther“:

The goal of the show, says curator Sheridan Tucker, is to show a wide range of the Afro-diasporic experience through photography and video. “I wanted to show escapism, nostalgia and time travel, recurring themes in afrofuturism,” said Tucker. “I’m excited people can tap into what I’ve been talking about for a long time.” 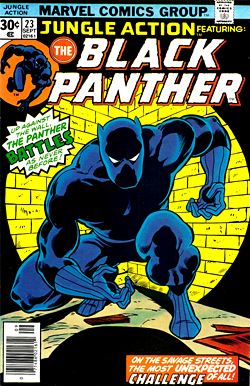 Now I know that to be a black nerd is by no means anomalous; there are millions of people who look like me and grew up loving comic books. Yet despite our numbers, we were underground for a long time. But now, there appears to be a widening cultural appreciation for what black people have always known: There are many ways to be black in America. The 44th president helped.

Barack Obama meant a lot to black nerds. Jordan Peele, the director of “Get Out,” told NPR back in 2012, “Up until Obama, it was basically Urkel and the black guy from ‘Revenge of the Nerds.’” President Obama showed us that to be black and nerdy could actually be an expression of black cool, what the author Rebecca Walker who compiled a series of essays on that topic, defines as audacity, resistance and authenticity in the face of white supremacy.

Roaring into theaters in the wake of Batman vs. Superman and before the summer movie season really gets going, the latest Marvel launching pad for yet more movies and series, Captain America: Civil War opens everywhere this week.

When Shakespeare wrote about the quality of mercy in The Merchant of Venice, chances are he wasn’t thinking about perpetually quipping guys in shiny suits slamming each other into walls…

Sometimes a film has a strong point to make. Sometimes that point is worth repeating for emphasis. And sometimes a film does little but repeat itself for two hours or so. That’s essentially what happens in Stephen Vittoria’s documentary Mumia: Long Distance Revolutionary.

My full review is at Film Journal International:

The film’s thrust is that Mumia Abu-Jamal, a Philadelphia journalist currently serving a life sentence without parole for the 1981 shooting death of a Philadelphia policeman, is one of the great radical voices of our time. To prove this, Vittoria trots out everybody from actor Giancarlo Esposito (who staged a controversial performance of Abu-Jamal’s writing in the 1990s) to firebrand intellectuals like Cornel West and Angela Davis to state their case. Abu-Jamal may be what Vittoria and his interviewees think, but this is not a film that will convince anybody of it…